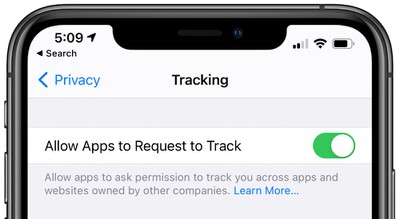 An early take a look at an ongoing analysis of Apples App Tracking Transparency feature recommends that the vast majority of iPhone users are opting out of tracking considering that it released on April 26.
According to the current data from analytics firm Flurry, just 4% of iPhone users in the U.S. have selected to decide into app tracking after upgrading their device to iOS 14.5. The information is based on a sampling of 2.5 million everyday mobile active users.
When looking at users worldwide who permit app tracking, the figure increases to 12% of users in a 5.3 million user sample size.
With the release of iOS 14.5, apps need to now ask for and get user authorization before they can access a gadgets random marketing identifier, which is utilized to track user activity across websites and apps. Users can turn off tracking for all apps, which is Apples default setting.
Given that the update nearly 2 weeks ago, Flurrys figures show a stable rate of app-tracking opt-outs, with the U.S. figure hovering in between 11-13%, and 2-5% worldwide. The obstacle for customized ads market will be considerable if the first 2 weeks wind up reflecting a long-lasting pattern.
Facebook, a vociferous challenger of ATT, has currently started trying to convince users that they should make it possible for tracking in iOS 14.5 if they wish to assist keep Facebook and Instagram “free of charge.” That sentiment would appear to break the social networks earlier claim that ATT will have a “workable” influence on its business and could even benefit Facebook in the long term.
Flurry Analytics, owned by Verizon Media, is used in over 1 million mobile applications, offering aggregated insights throughout 2 billion mobile devices each month. Flurry intends to update its figures every weekday for the day-to-day opt-in rate in addition to the share of users that apps can not ask to track, both in the U.S. and internationally.