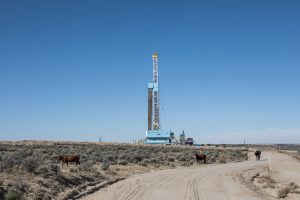 By Megan Kelly and Jon Goldstein

Policy action at both the tribal and federal levels this spring is creating promising momentum for cutting down on methane pollution on the Navajo Nation and across the Colorado Plateau, a step in the right direction for tackling climate change. Reducing methane waste would also improve public health and bring much-needed revenue to tribal and state governments.

In late April 2021, the Senate voted to restore an Obama-era U.S. Environmental Protection Agency rule to regulate methane emissions from oil and gas drilling. The Trump administration had previously rolled back this rule and eliminated federal requirements that oil and gas companies detect and fix methane leaks from their operations.

This is troublesome, because when methane leaks, other forms of pollution that also cause health problems escape. For example, leaking methane is often accompanied by volatile organic compounds, which lead to ozone formation and can harm the respiratory system and trigger asthma attacks. Controlling methane leaks cuts down on the release of other pollution, benefitting public health. The Four Corners region has a lot to gain from methane leak controls, since it sits beneath a potent methane cloud believed to contain 10% of all methane emissions from natural gas in the U.S.

Meanwhile, the Navajo Nation is setting a strong example as it works to promulgate its own rigorous methane rule to better regulate oil and gas development and reduce pollution on tribal lands.

An updated report recently released by the Environmental Defense Fund highlights the wisdom of these efforts. It finds that oil and gas companies operating on the Navajo Nation waste roughly 1.5 billion cubic feet of natural gas yearly, worth $4.8 million — enough to meet the annual usage of every home on the Navajo Nation for five months. This is disproportionately more than other companies operating across the U.S. If captured, this natural gas could add up to hundreds of thousands of dollars a year in additional royalties for the Navajo Nation.

The report points to the strength of the proposed rule from the Navajo Nation Environmental Protection Agency, and offers additional actions that the Navajo EPA may consider should it wish to make its already strong rule even stronger. These suggestions include quarterly leak inspections of all sources, and fixing leaks faster when they are detected.

Many Navajo leaders support methane regulations. Anita Hayes, manager of the Navajo Nation’s Tse Daa K’aan Chapter, says, “Stopping methane and air pollution is critical for the health of our planet and our people and the economic well-being of the Navajo Nation. The oil and gas industry must clean up its act,” Hayes continues, “and it is up to us, as native peoples, to affirm our autonomy and protect our communities. We need strong rules to reduce methane and air pollution at the state and federal, and tribal government level.”

If the new methane rule is passed on the Navajo Nation and sensible rules restored at the federal level, the Navajo Nation will not only collect royalties, but community members will be far more protected from dangerous emissions that impact the health of so many.

In a letter supporting the undoing of Trump’s methane rollback, President Nez writes: “There are thousands of oil and gas wells and miles of pipelines located on and running through the Navajo Nation. And while the Navajo EPA is developing our own regulations to limit harmful pollution from these sources,” Nez continues, “federal new and existing source standards are also of vital importance since our air knows no boundaries and pollution from neighboring areas can still have a negative impact on tribal communities.”

As the Colorado Plateau is a hot spot for oil and gas development, and home to communities such as the Navajo Nation that face significant economic and environmental impacts from lax methane regulations, it is imperative that strict regulations are put in place to limit methane leaks. As President Nez says, “…air knows no boundaries,” and the Navajo Nation and federal methane regulations will have a ripple effect, contributing to the global effort to combat climate change.