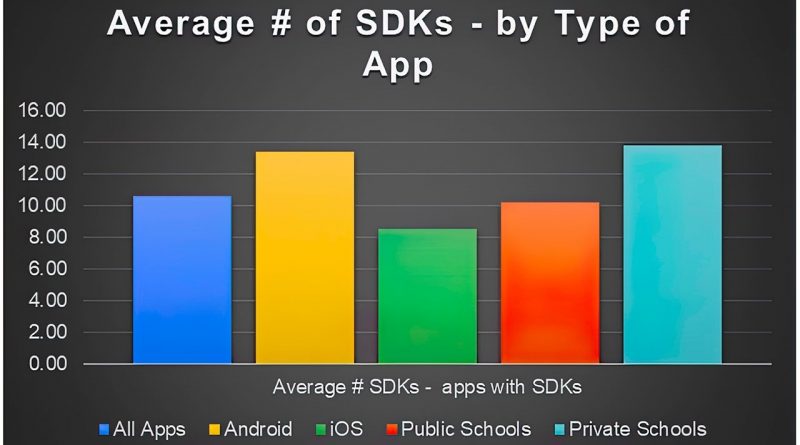 A new research study exposes that 60% of apps used by schools share information with 3rd celebrations, with iOS sharing less than Android, and as a rule, to less “risky” aggregators.The research study originates from Me2B Alliance, a non-profit group describing itself as “concentrated on considerate innovation.” The study discovered that Android apps were 3 times more most likely to share information with 3rd celebrations. Of the 44 apps found sharing trainee data, 73% were Android apps. Android apps were likewise much more most likely to send out data to 3rd parties labeled either “high threat” or “very high threat.” The research says 91% of Android apps send data to “high-risk” celebrations compared to 26% of iOS apps. 20% of Android apps sent out information to “extremely high-risk” parties, compared to just 2.6% of iOS apps.On average, each school app sent information to more than 10 third-party information channels. The third celebrations the apps sent information to consisted of marketing platforms like Google and Facebook.Data generally consisted of special identifiers that allow ad trackers and other 3rd parties to build tracking profiles for trainees. The profiling practice consists of kids under the age of 13. The research study includes that most of the apps initiated data transmission as quickly as the app loads. This finding implies that they start tracking the student even prior to theyve signed in to the app.
The study discovered Android used more SDKs
The Me2B Alliance evaluated a random sample of 73 apps used by 38 schools throughout 14 different U.S. states. The group carrying out the tests says the audited apps cover majority a million users, including trainees, their households, and teachers.” The findings from our research reveal the pervasiveness of data showing high-risk entities and the quantity of people whose information could be jeopardized due to schools absence of resources,” said Lisa LeVasseur, executive director of Me2B Alliance. “The study intends to bring these concerns to light to make sure the right funding assistance and defenses are in location to secure our most vulnerable residents – our children.”