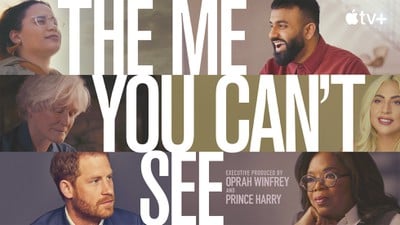 Apple today revealed that “The Me You Cant See,” a mental health documentary series from Oprah Winfrey and Prince Harry, will premiere May 21 on Apple TELEVISION+.
In the series, Apple says Oprah Winfrey and Prince Harry host honest discussions about psychological health and emotional wellness with singers, athletes, and other guests, while opening about their own mental health journeys and struggles.
Featuring high-profile guests, alongside a vast array of people from across the globe living with the difficulties of psychological health issues and resolving their psychological wellness, the series transcends culture, age, gender and socioeconomic status to destigmatize an extremely misinterpreted topic and provide hope to audiences who learn that they are not alone. The manufacturers partnered with 14 certified and respected specialists and companies from around the globe to help shed light on various pathways to treatment.
Participants in the series include Lady Gaga, Glenn Close, San Antonio Spurs player DeMar DeRozan, Phoenix Suns gamer Langston Galloway, mental health advocate and speaker Zak Williams, Olympic boxer Virginia “Ginny” Fuchs, star chef Rashad Armstead, and more, according to Apple.
” Now more than ever, there is an instant requirement to change the pity surrounding psychological health with wisdom, honesty and empathy,” said Oprah Winfrey. “Our series aims to spark that international discussion.”
” We are born into different lives, raised in different environments, and as an outcome are exposed to various experiences. Our shared experience is that we are all human,” stated Prince Harry, The Duke of Sussex. “The bulk of us bring some type of unresolved trauma, loss or sorrow, which feels– and is– extremely individual. Yet the last year has actually revealed us that we are all in this together, and my hope is that this series will show there is power in vulnerability, connection in empathy, and strength in sincerity.”