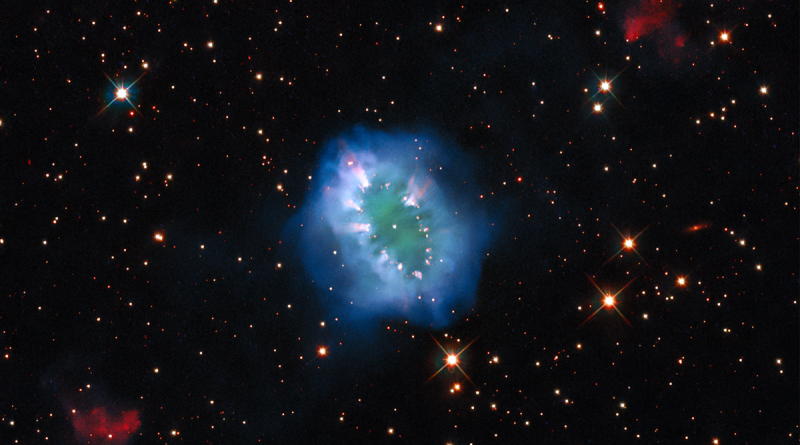 ESA/Hubble & & NASA, K. Noll
As anyone into astronomy likely already knows, NASA loves sharing amazing pictures of our universe. Just recently, NASA shared a stunning image of a nebula called the “Necklace Nebula,” which is referred to as “a diamond necklace of cosmic proportions.
The nebula– which also goes by its less-glamorous name, PN G054.203.4– lies approximately 15,000 light-years far from Earth near the constellation Sagitta. What we see now as the nebula was once a set of tightly orbiting stars comparable to our Sun. About 10,000 years back, the larger star expanded and consumed the smaller sized one, a procedure researchers call a “common envelope.”
The smaller star continued to orbit while inside its bigger buddy, which increased their shared rotation rate causing little bits of both to spin outwards. This ring of particles is what looks like the pendant, and the extra-dense groups of gas formed what appears like large diamonds around the nebulas ring.
The two stars are still there spinning; they are the little white dot in the center of the ring. The stars have the ability to finish an entire orbit around each other in simply over 24 hours. Hubble released an image of this same nebula almost a years back, however the new image is far better as NASA used numerous direct exposures from Hubbles Wide Field Camera 3 and advanced processing strategies to enhance it.
Source: NASA