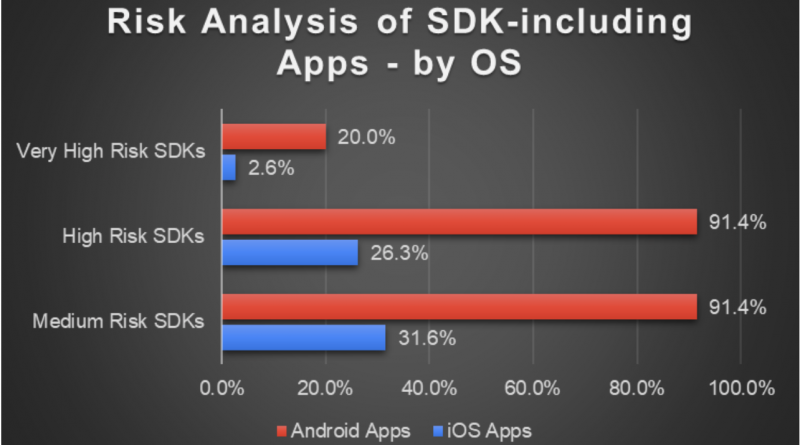 A new research study released today takes a thorough take a look at how apps used in schools are sharing kidss information with 3rd parties. The research found the bulk of school apps send data and that Android is 8x most likely to be sending out that data to “really high-risk” 3rd parties than iOS.

But getting more particular, the study exposed Android is a much bigger perpetrator than iOS.

The brand-new research study was carried out and released by the Me2B Alliance, a not-for-profit with the objective of “promoting the respectful treatment of people by innovation.” It included a random sample of 73 mobile apps utilized by 38 schools, “covering at least a half a million individuals (students, their families, teachers, etc.) who utilize those apps.”
In the big image consisting of both iOS and Android, Me2B found 6 out of 10 school apps send out student information to 3rd parties which on average, “each app sent information to 10.6 third-party information channels.”

Me2B states that Apples new App Tracking Transparency (ATT) feature that launched with iOS 14.5 lowers the threat of profile structure on Apple gadgets by third celebrations and “increases the respectfulness gap between iOS and Android apps.” The report states that ATT in iOS “may not fully get rid of the danger of profile building.”
Another concern is that the Me2B scientists think “upwards of 95% of the third-party data channels are active even when the user isnt signed in.”
The report likewise called out both Google and Apple for not detailing what third parties apps share information with:

Further, neither the Google Play Store nor the Apple App Store consist of details on which 3rd parties are receiving information, leaving users no useful method to understand to whom their information is going, which may well be the most essential piece of information for individuals to make educated choices about app use.

Me2Bs crucial takeaways from the study:

There is an inappropriate quantity of trainee data showing 3rd parties– particularly advertisers and analytics platforms– in school apps.
School apps– whether iOS or Android, public or private schools– should not consist of third-party data channels.
iOS apps were found to be more secure than Android apps, and with ongoing improvements the “privacy space” in between iOS and Android apps is anticipated to broaden unless Google makes some modifications.
People still have too little information about which third parties theyre sharing data with, and the app stores (Apple and Google Play) must make this info clearer.

You can read the full study on Me2Bs website here.
FTC: We use income earning car affiliate links. More.
Take a look at 9to5Mac on YouTube for more Apple news: